This is a pleasant, slice-of-life story about the fun and wonder of a snowy day for young children.

A young boy named Peter wakes up on a winter morning to discover that it snowed during the night.

Peter hurries out into the snow, experiencing all of the fun it has to offer.  He studies the footprints that he makes in the snow and uses a stick to make marks in the snow and knock snow off of tree branches.  He’s still too little to join in the snowball fight that the big boys have, but he has fun making a snowman and snow angels.

The snow is so much fun that Peter makes a snowball amd put it in his pocket to save for later.  Of course, the snowball in his pocket doesn’t last, and he worries that the snow outside will disappear as well, but there is even more snow the next day.  He gets a friend of his to come outside and join him in the fun.

It’s a simple, sweet story about one of the simple pleasures in life and one boy’s discovery of the wonders of snow. It would make a nice, calm bedtime story for young children.

This book is also a Caldecott award winner, and it is noted for being one of the first children’s books to feature a black main character.  Peter’s race is never mentioned in the text and is not directly a part of the story, but it is shown in the pictures.  Really, I think that’s part of what makes the book so great; although the book was considered ground-breaking for representing minorities, it does so in a way that’s completely relatable because his story could really happen to just about any child.

The Surprise Doll by Morrell Gipson, 1949.

Mary is a little girl who lives by the sea. Her father is the captain of a ship, and he travels to different countries all over the world. Sometimes, he brings presents for Mary from his voyages. So far, he has brought six dolls for her:

Susan – from England, with rosy cheeks

Sonya – from Russia, with a cute turn-up nose

Teresa – from Italy, with brown eyes

Katrinka – from Holland, with blonde hair

Marie – from France, with a smile that brightens her whole face 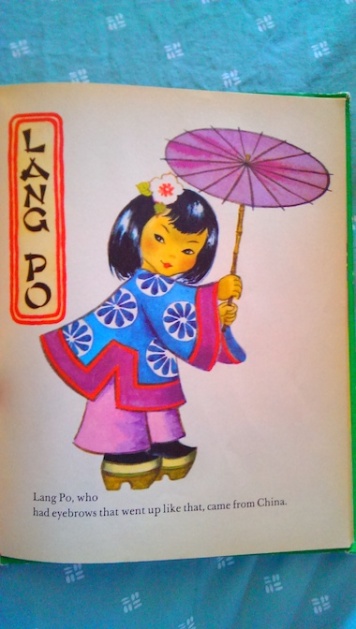 Mary loves her dolls, but she realizes that if she had a seventh doll, she would have a doll for each day of the week. She asks her father if he will bring her another, but he says that she already has enough dolls. 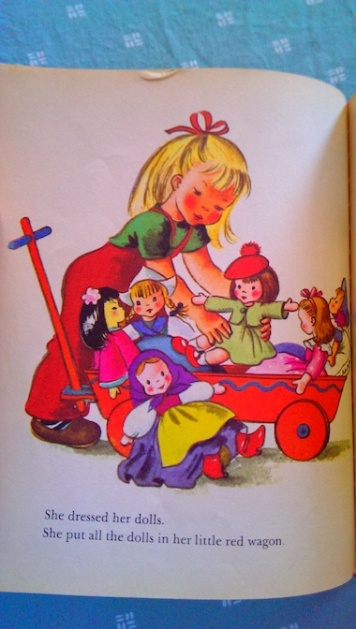 When her father refuses her request, Mary pays a visit to the local dollmaker. She takes along her six dolls and explains to the dollmaker why she wants one more. After studying Mary and her dolls, the dollmaker agrees to make one for her as long as she’s willing to leave her other dolls with him for a week. At the end of the week, Mary returns to collect her new doll and receives a surprise!

The “surprise” isn’t much of a surprise to the readers because the “surprise doll” is shown on the cover of the book, but it’s a cute story about how people around the world have many things in common. What the dollmaker notices about Mary and her dolls is that Mary shares certain qualities with each doll, the ones listed in the dolls’ descriptions above. So, he makes a doll for Mary that looks just like her by using her other dolls and their shared features as models. Her new doll, Mary Jane, is an American doll, but she has features in common with Mary’s other dolls from around the world, just like children in America can share qualities with children in other places. It’s a soft message about diversity and finding common ground. 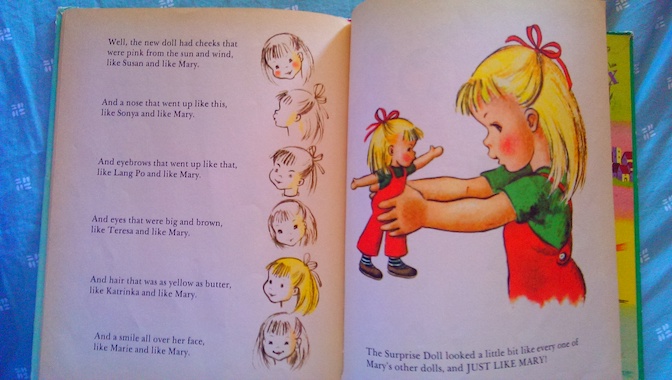 You might also check out the Book Lists section which has lists of books on specific topics and themes along with some additional resources on those topics.

Every book on this site, whether it's in a series or not, is listed under the Books by Decade section.

I also have another book blog that used to contain some children's books but which I have now repurposed:

There isn't much content yet, but there will be more soon! I have quite a lot of unusual books on various subjects, and I have decided to use Jestress's Bookshelf for the more adult books. Updates will be made as I sort through my book collection.